Cosmic Ray App and the Cosmic Ray Observer site are both created and run by nSCIR.ca

Version 1.2 of the Cosmic Ray App now has the ability to sends events to the Cosmic Ray Observer server! Take part in a real physics experiment. Events are shown in real time on the cosmicrayobserver.com global server.

Cosmic Ray App is a new iOS application that allows users to detect cosmic rays from outer space with nothing but their phone/tablet. The application works by detecting lit pixels in the phone’s camera when no light is entering. These pixels are lit as result of cosmic rays, local background radiation, or sometimes just noise. 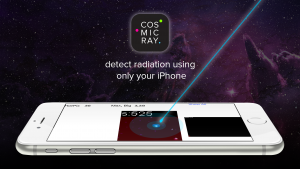 You need to block light from entering the rear camera. Black electrical tape works well. A dedicated slider can also be used, but some of them leak background light in.

Cosmic Ray takes long exposure pictures periodically (about twice per second) with a high iso setting. When an event is detected in a region of the camera image, that section is turned into a small image, and other data like the time and total strength of the event is recorded. This will detect cosmic ray muons, as well as gammas and electrons. Gamma rays and electrons can come from cosmic or local sources, like background radioactivity.

Cosmic Ray is primarily developed by

The Crayfis project appears to have been working on launching an application to do much the same thing as Cosmic Ray App does, but is not available on the App Store. A paper about their efforts is on arXiv.org – Observing Ultra-High Energy Cosmic Rays with Smartphones. The approach taken by Cosmic Ray App is obvisously similar, but differs in some important details. See our Signal Processing Details blog post for more.

The Cosmic Ray App makes a great education resource for Physics teaching at the grade nine to college level. For instance, start it up at the beginning of a class and then show the findings after 30 mins. It can be used to detect any kind of radiation.

The events shown on this page are the result of about 10 nights usage. Each night should net you one image of about the quality of the ones shown here. 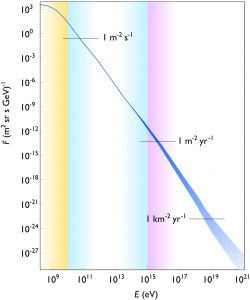 Cosmic rays are high-energy radiation, mainly originating outside the Solar System. Upon impact with the Earth's atmosphere, cosmic rays can produce showers of secondary particles that sometimes reach the surface. Composed primarily of high-energy protons and atomic nuclei, they are of mysterious origin. Data from the Fermi space telescope have been interpreted as evidence that a significant fraction of primary cosmic rays originate from the supernovae explosions of stars. Active galactic nuclei probably also produce cosmic rays. [Wikipedia]