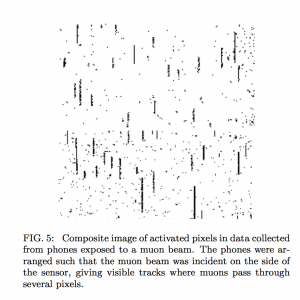 Cosmic Ray App takes a different approach. Look at fig 5 from the arXiv paper. This is with a muon source, so there are many tracks. Also there muons were shot at the phone along the edge of the detector, so all the tracks are long. A real event comes in at a random angle, and as such most of them will look like pin pricks. Or pin pricks on an angle. Instead of capturing at 30Hz, we capture a little slower (longer exposure), and then do lots of processing on phone. Cosmic Ray instead of looking for individual hot pixels looks for hot regions – essentially dividing the image captured into many small blocks. These blocks are processed and standout blocks are promoted to events. The events Cosmic Ray captures are thus tiny pictures of the hot parts of the screen. Usually this is one block, but sometimes two blocks are found on the same screen. These tiny images along with the data details constitute an event.

In a future version we will allow you to share these 60×60 pixel images with the world – effectively making a very large device.

Number of Cosmic Ray muons you can expect to see:

An iPhone has a detector size of about 4mm x 4mm, so 0.16 cm^2, so about one muon every 6 mins or so goes through the camera sensor. What percentage does the camera sensor pick up? Time will tell, as a full calibration has not been done, but the rate of decent events does seem to be about that.